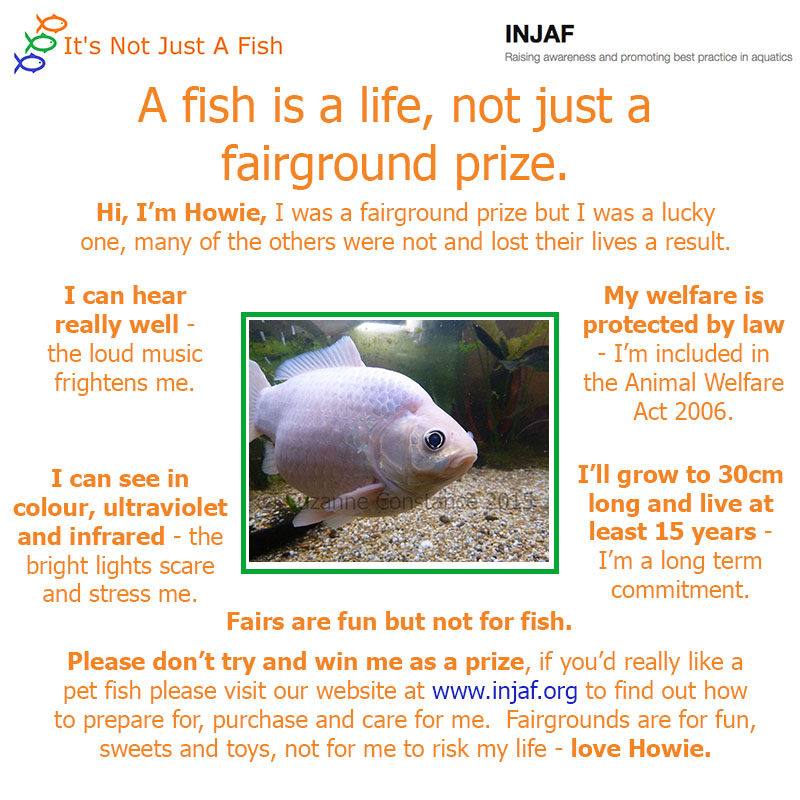 A fish is a life, not just a fairground prize – PDF for download

The Goverment’s response to a previous petition in 2008 was reported on the Practical Fishkeeping site:

“The Government said that it reconsidered a proposal for a total ban in the light of the Government’s “better regulation agenda”.

However, it concluded that the possible welfare benefits of a total ban were minimal and “did not justify ending the great pleasure felt by children and their families when they win a pet as a prize.”  Seriously?  A life is less important than a few minutes of pleasure?  How much pleasure will the child feel when their new pet is dead because no one had found out how to care for it before winning it on a whim?

Nathan Hill of Practical Fishkeeping Magazine recently (autumn 2015) provided a statement for a local councillor who was proposing a motion banning the giving of goldfish as prizes on fairground stalls in the area under the council’s jurisdiction. The statement was instrumental in helping the motion be passed unanimously and read as follows:

“To present a goldfish as a prize from a fairground stall is cruel on two counts – to the fish itself, and to the unwitting owner.

“Our understanding of goldfish, including their perceptions of pain, as well as their social interactions, curiosity and memory, has progressed to a point way beyond that understood by, and disseminated throughout, the general public. That goldfish can experience pain, fear and both acute and chronic stress is only disputed by isolated fringes of the borderline scientific community, but this understanding put to wider use now governs policy on welfare considerations across multiple European countries.

“The needs of goldfish are many, including consideration of their eventual size. Most goldfish fatalities can be tracked back to failures of water quality, usually by unwitting aquarists. That only a tiny fraction of goldfish in the UK are dying of age-related, natural causes is patently obvious to anyone who works within the industry and sees the scale of goldfish related problems.

“Water quality is of the highest consideration in goldfish care, and even some established, experienced aquarists may periodically struggle with interruptions to their filtration processes, potentially exposing the fish to harmful or lethal levels of nitrogenous waste such as ammonia or nitrite. The idea that an absolute newcomer, naïve to all filtration, adult size, water concerns and enrichment requirements of a goldfish is able to adequately provide for these fish is woefully optimistic at best, and a deceiving fiction at worst. A goldfish should not be considered as a disposable commodity to facilitate the learning curve of an entry level fishkeeper, but as a feeling entity deserving of its own considerations.

“The human aspect is also troubling. Children reduced to tears at the loss of a pet are not conducive to a happy family, and frequently when individuals who have ‘won’ a goldfish at a fair go on to discover the burden they have gained by taking on a demanding pet with a lifespan of decades, they can feel cheated.

“Fairground goldfish trading, far from generating further trade for the aquatics industry, is actually considered a toxic ‘underground’ aspect of the industry, which somehow manages to cheat its way out of the stringent criteria of the Animal Welfare Act that owners of respectable properties are required to adhere to.

“In a retail situation, a customer hoping to obtain a goldfish today could most likely expect to be redirected to other, much more suitable aquarium species. Store workers will often go to great lengths to explain the exacting needs of a goldfish, and how hard these can be to establish and maintain. They have to do this if they wish to avoid a conveyance of furious customers returning to vent their frustrations over dead fish and failures. Brick build retailers do not have the advantage of fairgrounds, in that their contract with the customer is ongoing. A fairground stall performs a single transaction and will have moved on by the time the goldfish owner has discovered the problems of their ‘prize’, leaving local retailers to try to pick up the often irreparable pieces of the resultant disasters.

“The nationwide banning of goldfish as prizes simply cannot come around quickly enough, but as long as it continues to linger, and as long as fairgrounds perpetuate the myth that goldfish are fine in bowls and that they are acting entirely above board in offering them, then we will remain in an ethically medieval state.”

The legal aspects of fish as prizes: the Animal Welfare Act 2006

The Scottish version of the Act specifically prohibits giving animals, including fish, as prizes.  Scotland – we applaud you!

INTRODUCTION
… The new Act makes it an offence to fail to take reasonable steps to ensure the welfare of a protected animal makes it an offence to cause a protected animal unnecessary suffering, prohibits using animals as prizes, raises the age limit for buying animals, increases the penalties for animal abuse and allows the courts to disqualify a person from owning, keeping or being in charge of animals …

WHICH ANIMALS ARE PROTECTED UNDER THE ACT?
All pets (including cats, dogs, rabbits, rodents, birds, horses, ponies, fish, snakes and other reptiles), farm, circus and zoo animals are protected by the new Act. In fact, all vertebrate animals which are looked after by people are protected. The vertebrate family of animals includes all creatures which are mammals, birds, reptiles, amphibians and fish.

The responsibility for ending the practice of giving goldfish as fairground prizes lies with us – the public – the people who visit those fairs and contribute to the trade.

The first thing to do is to avoid the stall completely – no customers, no money, no profit – no point in running that stall!  Money really does talk; if everyone stopped paying to try and win a goldfish as a prize they’d soon stop being offered as prizes.

We hope that by raising awareness of the needs of fish, providing information and resources, and helping people understand that it’s not just a fish, we can reduce the ‘demand’ for fish as prizes.  Let’s face it, if those bags contained hamsters or kittens there’d be outrage, the fact that it’s fish being given away doesn’t make it any less outrageous.

Swimmie, shown below, was also a fairground prize.  His owner has been caring for him since he came home unexpectedly with a family member, and is now hoping to find him a new home in a pond.  He’s actually a little bigger than Howie and we do wonder how many people would have tried to win either of them if they’d been at their full adult size when offered as prizes at the fair – somehow we suspect they wouldn’t have been as appealing!

If any children in your care are visiting a fair without you, explain very firmly to them that they are not to attempt, under any circumstances, to win a fish.  Explain the legislation to those that are old enough to understand and help them take responsibility for their actions and choices.  If your children are attending with friends, make sure they all understand that you do not want your child to come home with a fish.

Please see our raising your concerns article for further information.

Please check out the other articles in our Goldfish section for more information on how to keep these big, long lived and fabulous fish properly.

This website uses cookies to improve your experience while you navigate through the website. Out of these, the cookies that are categorized as necessary are stored on your browser as they are essential for the working of basic functionalities of the website. We also use third-party cookies that help us analyze and understand how you use this website. These cookies will be stored in your browser only with your consent. You also have the option to opt-out of these cookies. But opting out of some of these cookies may affect your browsing experience.
Necessary Always Enabled

Any cookies that may not be particularly necessary for the website to function and is used specifically to collect user personal data via analytics, ads, other embedded contents are termed as non-necessary cookies. It is mandatory to procure user consent prior to running these cookies on your website.