INJAF is delighted to be supporting the Big Fish Campaign. Below is some key information from BIAZA (British and Irish Associations of Zoos and Aquariums) which details the reasons for the campaign, the aims of the campaign, some information for fishkeepers, information on current activities, and most importantly how you can help. 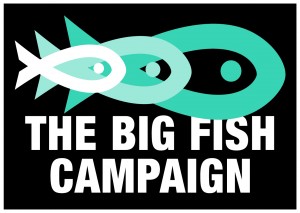 The Big Fish Campaign is an initiative set up by NAW (National Aquarium Workshop) and the BIAZA Aquarium Working Group having heard the results of research that indicated that over a period of just 4 months, 11 UK aquaria were asked to house 144 fish that had outgrown their owners’ tanks.

More and more frequently, fish of all shapes and sizes are being imported into the UK aquatics trade. A large percentage of these fish appear in general pet stores and are sold to unwary customers who do not expect their pet fish to grow to such enormous sizes and are left with a ‘BIG’ problem as a result of inadequate space or equipment.

Zoos and aquaria are being inundated with public donations of all sorts of fish species. Although members of the pubic may see this as the perfect solution for their problem, it creates problems for the aquaria themselves. It is often very difficult for them to mix donated stock with their own stock and they often lack the space to provide a purpose built home for the donated fish.

Therefore the zoos and aquariums in the UK decided to launch the Big Fish Campaign to stop the problem. The campaign first launched in Nov 2005 is back for 2012 and working with the trade to tackle the issue. It aims to raise public awareness about the need to make sensible, informed decisions when choosing pet fish. 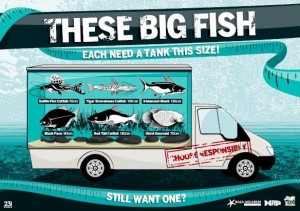 The Big Fish Campaign aims to:

The aim of the Big Fish Campaign is to raise awareness about the problem of aquarium fish that grow larger than the vast majority of home aquaria can accommodate, and to promote responsible buying and selling of these larger species.

The campaign will be focusing on a positive approach, including:

The campaign does not aim to ban certain fish from sale, or push for restrictive licensing, the campaign’s aims are quite the opposite; it is hoped that a more responsible attitude from fishkeepers, retailers and wholesalers/importers will help to prevent the need for future legislation.

How you can help – calling all hobbyists, retailers and anyone ‘fishy’!

What else can be done to help?

What else has the Big Fish Campaign done?

Don’t forget to like the campaign on Facebook to keep up with all latest news and events, not to mention find out where Buster is during the summer!

Further reading
Will you support the Big Fish Campaign?
Who’s to blame for the big fish problem?
Where do all those big fish keep going?
How much will this fish cost to keep in its lifetime?
Bournemouth Aquarium appeals to exotic pet owners
Maidenhead Aquatics – ‘Tankbusters & Co.’ Do you really know what you’re taking on?
Two catfish find new homes at Blue Planet Aquarium

Nathan Hill, Technical Writer at Practical Fishkeeping Magazine, put together two excellent (and rather sobering!) ‘info graphics’ which illustrate very clearly the sizes some of the commonly available fish can get to in comparison to a human (reproduced with kind permission of Nathan Hill and Jeremy Gay (editor) of PFK Magazine). 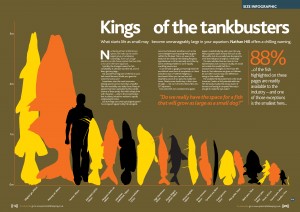 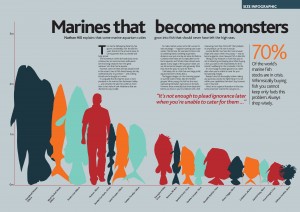 INJAF has some further information on
Tankbusters
Red tailed catfish – an aquatic big cat
Help with understanding how much room a species needs in an aquarium
Do fish grow to the size of their tank?
Raising your concerns

This website uses cookies to improve your experience while you navigate through the website. Out of these, the cookies that are categorized as necessary are stored on your browser as they are essential for the working of basic functionalities of the website. We also use third-party cookies that help us analyze and understand how you use this website. These cookies will be stored in your browser only with your consent. You also have the option to opt-out of these cookies. But opting out of some of these cookies may affect your browsing experience.
Necessary Always Enabled

Any cookies that may not be particularly necessary for the website to function and is used specifically to collect user personal data via analytics, ads, other embedded contents are termed as non-necessary cookies. It is mandatory to procure user consent prior to running these cookies on your website.